Every two years, the Interamerican Society of Psychology (SIP) calls graduate and undergraduate students to compete for the Student Awards Program in Psychology. These awards are given during each Interamerican Congress of Psychology. Students may submit works done during their studies of  undergraduate (bachelor) or graduate (master and doctorate) and be written in one of the four official languages of SIP: Spanish, English, Portuguese or French.

The competition consists of two phases. Initially, who is interested in competing should present an abstract that can hold up to 1,000 words, excluding tables, figures and references. Thereafter, the author/s of pre-selected works will present a broad version (second phase), containing up to 10,000 words. In this version may include tables, figures and references commensurate with the submitted text. All entries must follow the rules of publication and style of the American Psychological Association in the latest version. The editorial standards of the Interamerican Journal of Psychology also apply. 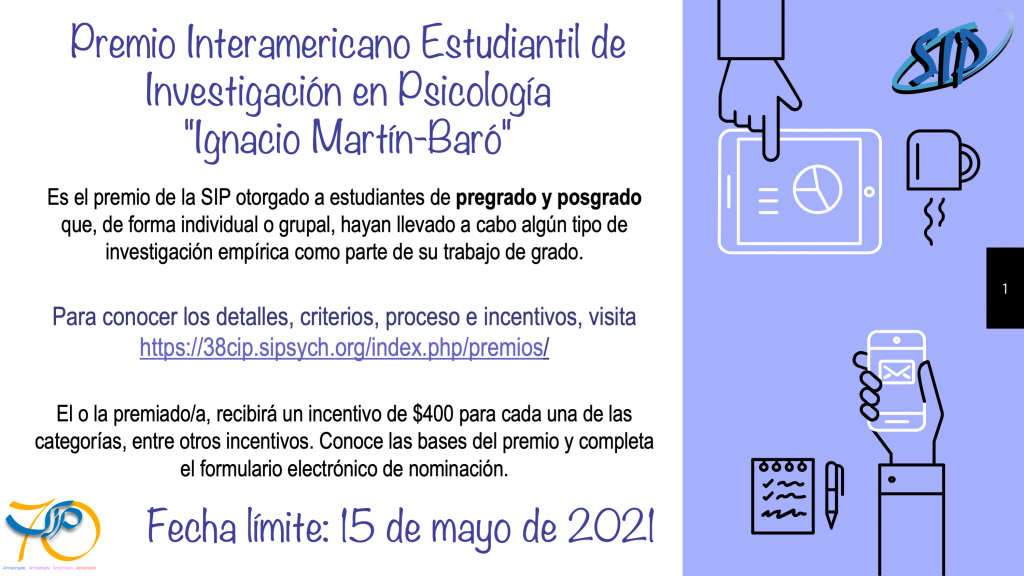 Evaluation of the Works

The works are evaluated by the members of the Student Awards Committee which is appointed by the SIP’s Board of Directors. The Committee evaluates the submitted abstracts and choose those they consider the best according to academic criteria established. The evaluation of the broad versions, is done without knowing the names of the author/s, institution or country of origin, using the following criteria:

The authors of the winning entries are: